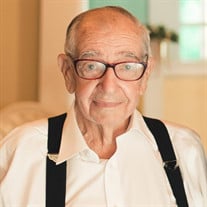 William Ovid Wright, 87, of Waterloo, passed away, Sunday January 2, 2022. His visitation will be Wednesday , January 5, 2022 from 12:00 P.M. until 2:00 P.M. at Morrison Funeral Home, Central Heights. The funeral will immediately follow with... View Obituary & Service Information

The family of William Ovid Wright created this Life Tributes page to make it easy to share your memories.

Send flowers to the Wright family.