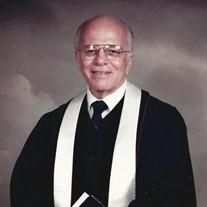 Reverend William Alton Parris of Tuscumbia, age 98, made his transition to Heaven on Tuesday, August 3, 2021. He was born on March 6, 1923 in the Springfield community of Randolph County, Alabama. Visitation with the family will be in the sanctuary at the First United Methodist Church of Tuscumbia, Alabama from 12:00 noon to 2:00 p.m. on Monday, August 9, 2021. The service will follow the visitation in the Church sanctuary at 2:00 p.m. with Rev. Dr. Rudy Guess and family members conducting the service. The service will also be livestreamed through the Church’s Facebook Page and through the Church’s YouTube site. The burial service will be at Midway United Methodist Church Cemetery, Highway 431 near Wedowee (Randolph County), AL at 2:00 p.m. on Tuesday, August 10, 2021 with visitation following the service. Rev. Parris was preceded in death by his wife of 71 years, Jimmie Ruth Burton Parris; his parents, Elijah Lee Parris and Stacey Eunice Grant Parris; and his three brothers Grant Parris, Robert Parris, and E. L. Parris, Jr. Rev. Parris is survived by his sister, Sarah Belle Parris Burdette of Vestavia, AL; and his three children Joel B. Parris (Joan) of Tuscumbia, Rev. Mark D. Parris (Julianne) of Tuscumbia, and Elizabeth “Beth” Parris Barrett (Rev. Alan T.) of Pine Mountain, GA. He is also survived by his eight grandchildren: Jamie Parris (Jessica) of Homewood; Jana Beaver (Brant) of Florence; Michael Parris of Denver, Colorado; Jenny Boozer (Justin) of Muscle Shoals; Molly Bellow (Jonas) of Round Rock, Texas; Elizabeth Williford (Flynn) of Ooltewah, Tennessee; Stacey Barrett of Pine Mtn., Georgia; and Andrew Barrett (Amanda) of LaGrange, Georgia. He is also survived by his twelve great grandchildren: Sumner Parris, Grayson Parris, Meade Parris, Rebecca Beaver, Lydia Ryan, Lily Boozer, Wesley Ryan, Brooks Beaver, Genevieve Bellow, Easton Boozer, Lorelei Bellow, and Rosaleen Williford. He also is survived by many nephews, nieces, and cousins. Pallbearers will be grandsons and nephews. Honorary pallbearers will be those who were called by God to preach, be missionaries, or be other Christian workers under the pastorship of Alton Parris. Joshua 24:15 (King James Version): ”…but as for me and my house, we will serve the Lord.” Alton was a retired United Methodist minister. He pastored churches in North Alabama for 44½ years. He graduated from Randolph County High School in 1941. He spent three years in the U. S. Army Artillery and served in Europe in World War II. He was awarded the Bronze Star while in France. He graduated from Piedmont College in Demorest, Georgia and from the Candler School of Theology at Emory University in Atlanta, Georgia. He served as the Alabama State Chaplain of the Order of St. Luke the Physician, President of the Brasher Springs Camp Meeting, and on the SIFAT (Servants in Faith and Technology) Board of Directors. In his retirement, he continued to preach and teach a great deal. He enjoyed his family and family gatherings. He lovingly prayed daily for every family member by name. Alton and Jimmie Ruth Burton met at Southern Union Junior College. They were married on that campus in Wadley (Randolph County), Alabama on March 27, 1948. During their active years in ministry and during early retirement years, they enjoyed traveling in the U.S. and overseas. Alton lived his early years in Randolph County in Alabama; he was the youngest of 5 children. His family lived in the Springfield Community, in the Midway Community, and in the town of Wedowee. During his working years he lived in the communities where he was preaching: Wadley-Westside Methodist Church Circuit (a seven-point circuit based in Wadley serving these seven churches: Forresters Chapel, Almond, Mt. Gilead in Sikeville, Malone, Daviston, Mt. Zion, and Mt. Vernon), Grace Methodist Church in Atlanta, Hokes Bluff Methodist Church, Haleyville First Methodist Church, Lake Highlands Methodist Church (East Lake, Birmingham), East Gadsden United Methodist Church, First United Methodist Church of Tuscumbia (for 13 years), and Guntersville First United Methodist Church. He also served as a District Superintendent of the Roanoke District of the North Alabama Conference of the United Methodist Church. After retiring from full time ministry, he and Jimmie spent their retirement years in Rainbow City and later in Sheffield and Tuscumbia, Alabama where they were active members of the Tuscumbia First United Methodist Church as long as their health permitted. Alton had a special love and deep admiration for his “preacher boys” who were called by God into the ministry during his years as a minister. He lovingly followed their careers and constantly prayed for them to have effective ministries sharing Jesus with their congregations and communities. The family wishes to thank the staffs of Mitchell-Hollingsworth Long Term Care, Shoals Hospice, Morningside Assisted Living, Brother’s Keeper Companion Care, and Kindred Home Health for their care and assistance of Alton in these last years of his life. In lieu of flowers, the family requests contributions to the “Faith Promise Missions Fund” (to support local, national, and international missions) at Tuscumbia First United Methodist Church, 104 E. 3rd St., Tuscumbia, AL 35674. Matthew 25:23 (King James Version): “His Lord said unto him, Well done, good and faithful servant; thou hast been faithful over a few things, I will make thee ruler over many things: enter thou into the joy of thy Lord.”

Reverend William Alton Parris of Tuscumbia, age 98, made his transition to Heaven on Tuesday, August 3, 2021. He was born on March 6, 1923 in the Springfield community of Randolph County, Alabama. Visitation with the family will be in the... View Obituary & Service Information

The family of Rev. William Alton Parris created this Life Tributes page to make it easy to share your memories.

Reverend William Alton Parris of Tuscumbia, age 98, made his...

Send flowers to the Parris family.