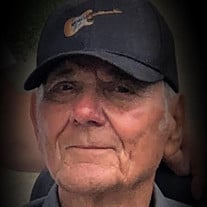 Age 89 of Wilmington, Illinois and formerly of Tuscumbia, Alabama, passed away peacefully on Sunday morning, November 14, 2021 at his home in Wilmington. Born on the family farm March 26, 1932 in Tuscumbia, Alabama, Walter David was a son of Curtis Ray and Mary (Bennett) Brooks. He was educated in the rural schools and started working at young age, alongside his 8 siblings. Walter began picking cotton in the fields at the age of 5, And later started driving the wagon. Music was always a big part of the Brooks family growing up, and when not working or in school, he was a self-taught musician and played the guitar with the family. At the age of 19, Walter met and married the love of his life, Gracie Pate. Soon thereafter they relocated to Chicago, where he worked playing music in the Honky Tonks by night and drove a taxi by day. This is also where they began their family and welcomed their first three children into the world. In 1953, Walter gained employment with Fisher Body, General Motors, where he entered into a position in the electrical department, and elevated to be a master welder. The family moved to Wilmington, Illinois in the late 1950’s and the following three children completed the family of six. Walter was a self driven true inventor, who could fix anything and wouldn’t buy anything he could build himself. He took pleasure in the outdoors, and enjoyed fishing, hunting and reloading. He was a old school traditional father who believed in tough love, and believed that family was everything. Following the death of Gracie in 1987, Walter met Irene Coleman, whom he went on to marry. Following his retirement from Fisher Body, General Motors in 1989 the two moved back to his hometown of Tuscumbia, Alabama, where he enjoyed many years working his 21 acre farm in the hills. In his spare time he enjoyed working in his machine shop; taking care of his horses, chickens and goats; playing checkers, and of course his music. Soon after the death of Irene, Walter’s health brought him back to Wilmington, where he made his home with his daughter and son-in-law, and their family until becoming eligible to move into the local Stough Group Home. Walter was known throughout the community on his scooter, driving through the park listening to the water, and visiting with anyone who would lend an ear. He had a selfless demeanor and was happy helping anyone in need; whether it was fixing their scooter, or buying a meal at McDonalds for a stranger. Gone from our sight, Walter Brooks, leaves behind a collection of memories of being a true charmer that knew the value of education, led by example of hard work, and valued family to the fullest extent. Survivors include his six children: Wanda (Jonathan) Meder of South Wilmington, Illinois, Mary Starbuck of Wilmington, Illinois, Tommy (Amy) Brooks of Alabama, Kenny (Debbie) Brooks of St. Louis, Missouri and Susan (Tim) Cragg and Karen (Mike) Bohac, both of Wilmington, Illinois; (12) grandchildren: Thomas (Casey) Brooks of Georgia, William (Misty) Hook of Illinois, Maria Brooks and David and Andrea Brooks, all of Alabama, Jairid (Omayra) Starbuck of Nevada, Jessica David of Florida, Michael Starbuck of Arkansas, and Cristin Bohac (Fiance’ – Chris Crook), Kyle Cragg, Megan (Scott) Jarvis, Joshua Cragg and Kalee Cragg, all of Illinois; great-grandchildren: Dalton, Conner, Gracie and Bradley Brooks, Noah and Payton Hook, Jocelynn and Jasmine Starbuck, Derek and Autumn David, Aiden Riggs, Ryan Crook, Kaden Cragg, Gracie Jarvis, and Ashlee and Myrangelique Cortez; one brother Lloyd (Doris) Brooks, and one sister, Melvina (the late Dan) Willis, both of Tuscumbia, Alabama; and numerous nieces and nephews, as well as his devoted caregivers: Peggy Kunz and Rachel Miller, and dear friends: Wanda Addison and Don Lund and Jason Pace, who would visit and read scripture to Walter in recent days. Walter was preceded in death by his parents; first wife, Gracie; second wife Irene, daughter-in-law, Rita Kay Brooks, and siblings: Howard (Marilyn “Tootsie”) Brooks, Homer (Ludie) Brooks, Evelyn (Odie) Tubbs, Bertha May (Elmer) Mitchell, Grover (Peggy) Brooks and Curtis (Junie) Brooks. A visitation and funeral service will be held at Morrison Funeral Home in Tuscumbia, Alabama on Monday, November 22, 2021, which would be the wedding anniversary of Walter and Gracie. Visitation will be from 10:00 a.m. until the time of funeral service at 12:00 p.m. Walter will then be laid to rest in New Bethel Cemetery in Tuscumbia. Pallbearers will be: Kenny Brooks, Thomas Brooks, David Brooks, Mike Bohac, Jon Meder and Josh Cragg. Honorary pallbearers will be Tommy Brooks, Tim Cragg and Kyle Cragg. Preferred memorials may be made as gifts in Walter's memory to the Wilmington School District Foundation For Excellence,209 Wildcat Drive, Wilmington, Illinois 60481, for the creation of a Math and Science Scholarship.

The family of Walter David Brooks created this Life Tributes page to make it easy to share your memories.

Age 89 of Wilmington, Illinois and formerly of Tuscumbia, Alabama,...

Send flowers to the Brooks family.