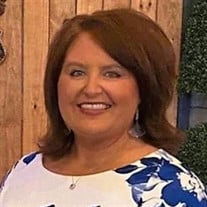 Tina Hovater Mellott, age 48, passed away peacefully on Wednesday, October 20, 2021, at Princeton Baptist Hospital in Birmingham, Alabama. Visitation will be Monday, October 25, from 6:00 until 9:00 p.m. at Morrison Funeral Home, Tuscumbia. The funeral service will be Tuesday, October 26, at 11:00 a.m. at Launch Point Church with Shane Swinney. Burial will follow at Oakwood Cemetery, Tuscumbia. Mrs. Mellott was born on January 26, 1973, to William Hovater and Robin McCorkle Minch, and raised by her parents Robert and Marciel McCorkle. Tina attended Sheffield High School, where she enjoyed band and was a drum major. She graduated top three of her class in 1991. Tina went on to attend the University of North Alabama, where she obtained her bachelor’s degree in accounting in 1995. Mrs. Mellott was married to Ronald James Mellott on August 10, 1995 and was happily married for 26 years. She was a devoted stay at home mother to her three children, Baylee Mellott Bush, Krysten Faith Mellott, and Robert Canon Mellott. Tina was a faithful member of Launch Point Church where she was loved by her women of worth life group. Tina was known for her genuine friendships, constant laughter, and steadfast faith. Her three children were her world and that was widely known by her community. You could find her at softball games, wrestling matches, volleyball games, band competitions, and under the Friday night lights supporting her three children’s passions. She made sure that they felt loved and supported in everything that they did. She always said that her calling in life was to be a good mom, and she did just that. Her faith in Jesus Christ is what stood out the most about her. When Tina said she was praying for you, you knew that heaven was being flooded with her voice and cries. Mrs. Mellott is preceded in death by her parents, Robert and Marciel McCorkle; mother, Robin McCorkle Minch; and brother, Anthony Steven Minch. She is mourned by her husband, Ronald James Mellott; children, Baylee Mellott Bush (Elliott), Krysten Faith Mellott and Robert Canon Mellott; sisters, Melissa McMeans (Chris), Amanda Freeman, Alexia Hovater, and Kendral Hovater; brothers, Willie Hovater (Randa), Brantley Hovater; father, William Hovater; uncle, Robert W. McCorkle Jr. (Lisa) and a host of loving friends and family. Pallbearers will be Chris McMeans, Barry Wright, Chad Killian, Charles Hovater, Lee Bratton and Brian Munger. Honorary pallbearers will be Kade Cooper, Hunter Kilpatrick, and Sabian Freeman. Thank you to all the doctors, nurses, and respiratory therapists at Decatur Morgan Hospital, Lawrence Medical Center, and Princeton Baptist Hospital in Birmingham for taking exquisite care of Tina over the last two and a half months. The care that was shown to Tina and the family will never be forgotten. A special thank you to her nurse Tiffany at Princeton Baptist for all that she did during her final days.

The family of Tina Hovater Mellott created this Life Tributes page to make it easy to share your memories.

Send flowers to the Mellott family.