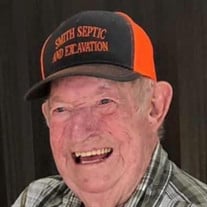 The world lost a gentle, humble, loving, and soft-spoken man the day our husband, father, an granddaddy, Sterlin Smith, took his last breath here on earth, February 24, 2021. Visitation will be Thursday, February 25, from 6:00 – 8:00 p.m. at Morrison Funeral Home, Tuscumbia. The funeral service will be Friday, February 26, at 10:00 in the funeral home chapel with Donald Kidd and Mike Brooks officiating. Dad will be taken by his sons on his final wagon ride to Glendale Cemetery, Leighton. He will be laid to rest beside his sons, Keith and Terrel. To view the livestreamed service, visit Sterlin’s tribute page at morrisonfuneralhomes.com. Grandaddy was born November 10, 1935 to Roy and Vennie Kidd Smith, of Lawrence County, Alabama. Sterlin’s siblings were Melbaline Berryman, Marcelene Franks, and Royce, Kyle, And Terrel Smith, all of whom preceded him in death. Grandaddy graduated from Hatton High School in 1954. He worked several jobs, even in Illinois, then returned home to marry the love of his life, Barbara Faye Franks, on May 25, 1956, the day after she graduated from high school. Grandaddy had several jobs. During his time at Stylon, he built lifelong friendships that exist to this day. During his working career, dad donated gallons of blood to the American Red Cross. He worked at Champion Paper Mill for 30 years, retiring to spend more time with his wife and friends doing what he enjoyed most – wagon riding – which came right behind his faith and family. He often took week-long rides ending up in Columbia, TN, Winfield, AL, or Linden, TN, while showing his mules and winning “some pocket change”. Grandaddy loved to ride by car or wagon past old homeplaces in the Wolf Springs and Hatton Communities. But he loved to “hook-um-up” and take short rides with mom or the grand- and great-grandchildren around the roads near home. While many young people enjoy riding four-wheelers, Grandaddy’s grandchildren and great-grandchildren enjoyed riding in mule-drawn wagons. Grandaddy was a member and greeter at his beloved Highland Park Church of Christ family. He was preceded in death by his sons, Keith Smith and Terrel Smith; parents; and siblings. Grandaddy leaves behind his wife of over 64 years, Faye Smith; sons, Greg Smith (Pam) and Mike Smith (Camille), and daughter, Pam Roberts (Danny), all of Sheffield; daughters-in-law, Kady Smith and Kristy Smith; grandsons, Jason and Justin Mahaffey, Josh and Craig Smith, and Joseph and Hughston Smith; granddaughters, Rene Robinson and Cheyenne Stanfield; great-grandchildren, Tyler, Madison, and Alaina Mahaffey, Kinsley, Kamryn, Easton, Bryant, Wyatt, Levi, Brinlee, and Sutton Smith, and Caden, Channing, Charlie, and Rory Stanfield. Sterlin’s grandsons, Jason and Justin Mahaffey, and Josh, Joseph, Craig, and Hughston, Smith, will serve as pallbearers. Kenny Gargis, Bobby Denton, Bob Burnell, Tip Berryman, and Tyler Mahaffey, Bubba Franks, Ussery Etheridge, and Dr. Lynn Ridgeway will serve as honorary pallbearers.

The family of Sterlin Pink Smith created this Life Tributes page to make it easy to share your memories.

The world lost a gentle, humble, loving, and soft-spoken man...