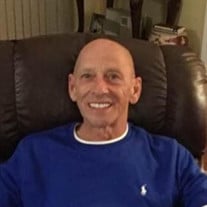 Stephen D. “Stevie” McCorkle, 68, Tuscumbia, passed away on Wednesday, September 15, 2021. The funeral service will be Saturday, September 18 at Morrison Funeral Home, Tuscumbia, beginning at 11:00 a.m. with Ed White officiating. Interment will be in Colbert Memorial Gardens, Tuscumbia. Stevie was a beloved brother who will be missed by his siblings. He was a member of the Baptist faith and worked as a self-employed carpet installer for fifty-two years. Stevie loved Corvettes and was a member of the National Corvette Club. He was an avid Cleveland Browns fan, as well as a great Alabama fan – Roll Tide! He was preceded in death by his father, Ford McCorkle; mother, Bessie Alexander McCorkle; nephew, Chris McCorkle; and brothers-in-law, John Smelley, Jr. and Richard Sharp. Stevie is survived by his brothers, Joe McCorkle (Marie), Tuscumbia, and Dalton McCorkle (Renee), Florence; sisters, Kaye Smelley and Phyllis Sharp, both of Muscle Shoals; aunts, Ruth Alexander, Tuscumbia, and Gladys Alexander, Florence; and several beloved nieces, nephews, and cousins. Pallbearers will be J. D. McCorkle, James Davenport, Zach Wynn, Jeff Wynn, and Kyle Bragwell. The family would like to offer special thanks to Dr. Loren McCoy and Dr. Peter Johnson for their care of Stevie.

The family of Stephen D. McCorkle created this Life Tributes page to make it easy to share your memories.

Send flowers to the McCorkle family.