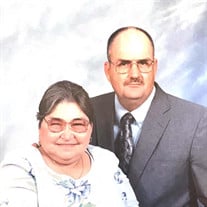 Silas “Buddy” Hall Scoggins, Jr. was born February 8,1947, in Sheffield, AL and he passed away on Saturday, November 6, 2021, in Cookevllle Regional Medical Center at the age of 74. He was the son of Silas Hall Scoggin, Sr. and Annie Crowder. Mr. Scoggins was a laborer in construction and a member of the McCoinsville Church of Christ. He was married to Jonna Marie Scoggins who passed away on October 31, 2004 after 36 years of marriage. He was preceded in death by his parents; step-mother, Birdie Scoggin; and his wife, Jonna Marie Scoggins. Survivors include his son, Matthew (Amanda) Scoggins, of Gainesboro; brother, Sam Scoggin, of Tuscumbia, AL; sisters, Nancy Isom, of Tuscumbia, AL, and Joan Stewart, of Louisville, KY; three grandchildren, Adrianna Scoggins, Mlcah Scoggins and Abigail Scoggins, all of Gainesboro. Visitation will be held at Morrison Funeral Home in Tuscumbia, AL on Tuesday, November 9, from 6:00 – 8:00 p.m. and at Anderson Upper Cumberland Funeral Home on Wednesday, November 10, from 2:00 p.m. until 6:30 p.m. and again on Thursday, November 11, from 10:00 a.m. until 2:00 p.m. Funeral services will be at 2:00 p.m. on Thursday, November 11, in the Chapel of Anderson Upper Cumberland Funeral Home with his son, Matthew Scoggins officiating. Burial will follow in Draper Cemetery in the Wartrace Community of Jackson County. In lieu of flowers, memorial donations can be made to the Jackson/Smith Co. Youth Camp or Draper Cemetery by contacting the funeral home listed below. Anderson Upper Cumberland Funeral Home is in charge of local arrangements. 931-268-1550

The family of Silas "Buddy" Hall Scoggins created this Life Tributes page to make it easy to share your memories.

Send flowers to the Scoggins family.