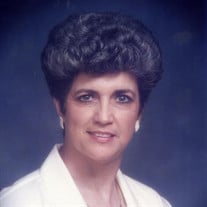 Shirley James Isbell, 86, of Sheffield, passed away on Monday, October 18, at her home, surrounded by her family. Visitation will be Thursday, October 21, at Morrison’s Funeral Home in Tuscumbia from 12:00 -2:00 p.m. The funeral service will begin at 2 p.m. in the funeral home chapel with Frank Mills officiating, along with Thomas Howard and Clifford Miles. Burial will follow in Oakwood Cemetery in Sheffield. Pallbearers will be Wesley Gamble, Larry McGee, Barry McWilliams, Todd McWilliams, Jeff Patterson, and Ron Thompson. In June 2021, Shirley and her beloved husband, Dr. Raymond Isbell, celebrated their 68th wedding anniversary. In addition to her husband, she is survived by her daughter and son-in-law, Joni and Phillip Presley, of Tanner; her son, Michael Isbell, of New York NY; her grandchildren, Hannah Ferguson, of Decatur, and Luke Presley, of St. Louis MO; her granddaughter, Alice Ferguson, of Decatur; her brother-in-law, Walter McWilliams, of Red Rock; special cousins, Virginia Olander, of Bay St. Louis MS, and Sam Williams, of Mountain Brook, AL; and many wonderful nieces and nephews, including Thomas Howard of Russellville, Ellen Thompson of Madison, AL, Todd McWilliams of Oakland, TN, and Barry McWilliams of Red Rock, AL. The daughter of the late Ed and Clintell James, and the sister of the late Betty James McWilliams, Shirley was raised in Barton and graduated from Cherokee High School. She worked for several decades in the banking and financial services field and was the longtime leader of the Lauderdale County Teachers Credit Union. Her family was her greatest joy. Shirley and her husband were members of the Crosspoint Church of Christ in Florence, where they have been surrounded, supported and sustained by a loving community. She was a devoted wife, a loving mother, and a source of light and joy wherever she went.

Shirley James Isbell, 86, of Sheffield, passed away on Monday, October 18, at her home, surrounded by her family. Visitation will be Thursday, October 21, at Morrison&#8217;s Funeral Home in Tuscumbia from 12:00 -2:00 p.m. The funeral service... View Obituary & Service Information

The family of Shirley James Isbell created this Life Tributes page to make it easy to share your memories.

Shirley James Isbell, 86, of Sheffield, passed away on Monday,...

Send flowers to the Isbell family.