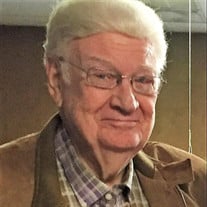 Paul Sanders Slatton, 84, of Florence, died Tuesday, November 30, 2021. Visitation will be Tuesday, December 7, from 12:00 until 2:00 p.m. in the adult center at Cross Point Church of Christ. The funeral service will immediately follow with Frank Mills, Doc Shell, and Mark Sain officiating. Burial will be at Tri- Cities Memorial Gardens. Mr. Slatton has served as owner and general manager of WBTG “We Broadcast the Gospel" since the station came into existence in February 1978 and has been involved in broadcasting since 1957. He grew up in Lauderdale County near St. Florian and graduated from Rogers High School in 1956, followed by radio engineering school. He has been married to Joyce since 1956. Paul is a member of Cross Point Church of Christ in Florence. He was a godly man who was passionate about both radio and ministry, and he used his gifts in engineering and business, along with his unmistakable voice to advance the Good News of Jesus Christ. Until just a couple of weeks ago, he reported to work every morning and continued to DJ on both the Southern Gospel station and sister station WBTG-AM 1290, home to "Memory Music" and the Party Line. Mr. Slatton is preceded in death by his parents, Herman Kell Slatton and Vesta Lee Sanders Slatton; brothers, Earl Slatton, Henley Slatton, and John Slatton. He is survived by the love of his life, Joyce Mae Clemmons Slatton; sons, Christopher Sanders Slatton and Victor Paul Slatton and wife Ian Noelle Widner Slatton; and granddaughter, Riley Brooke Slatton. Pallbearers will be the employees and past employees of WBTG Radio. Honorary pallbearers are Charles Thompson, Cliff Miles, David Williams, Gerald Clark, Scotty South, Owen Lewis and Jim Bevis.

Paul Sanders Slatton, 84, of Florence, died Tuesday, November 30, 2021. Visitation will be Tuesday, December 7, from 12:00 until 2:00 p.m. in the adult center at Cross Point Church of Christ. The funeral service will immediately follow with... View Obituary & Service Information

The family of Paul Sanders Slatton created this Life Tributes page to make it easy to share your memories.

Send flowers to the Slatton family.