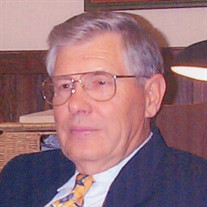 Paul Rex Keeton passed away Friday, January 29, 2021, at the age of 86 at the University of Alabama Hospital, Birmingham, AL, after a brief illness. Rex was born in Cherokee, Alabama on June 21, 1934, to loving parents, Paul and Lenise Keeton. He attended Cherokee High School and graduated from Florence State College (University of North Alabama), Florence, Alabama, with a double bachelor’s degree in Chemistry and Math. He served in the United States Army. He retired from Reynolds Metals Company after a 35-year career as a chemist. He was very active on the Board of Helen Keller Hospital for more than twenty years and was a longtime loyal board-member of Barton Cemetery Committee. Rex was a devout Christian and of the Methodist Faith. He was a past member for many years of both the Cherokee First United Methodist Church and the Sheffield First United Methodist Church. He is currently attending Tuscumbia United Methodist Church, Tuscumbia, Alabama. Rex was a wonderful, loving husband to his wife of 54 years, Elizabeth, who loved him so much. He was a loving uncle to his nieces and nephews who adored him. He has a special love for his family and had a loving spirit for all his friends. Rex’s special interests were flying private aircraft, an appreciation for all aircraft, a love of history, and antique cars. Rex was preceded in death by his parents; his brother, Howard Keeton; and sister, Yvonne Underwood. A private graveside service and celebration of his life will be held with Reverend Dr. Rudy Guess officiating. Interment will be in Barton Cemetery, Cherokee. Rex’s nephews, John Underwood, Lance Underwood, O’Neal Keeton, John Carson, Thomas Freeman, Dr. Richard Thomason, David Williams, and Douglas Williams will serve as pallbearers. Honorary pallbearers will be Dr. Samuel Williams, Carter Reid, Dwayne Keeton, Fletcher Smith, Dale Tapp, Jesse Thomason, Billy Heupel, and Ronnie Askew. The family would like to thank Dr. Josh Vacik, M.D., Sheffield, AL, and Dr. José Tallaj, M.D. Cardiologist Specialist of University of Alabama Hospital, Birmingham, Alabama. In lieu of flowers, donations may be made to Barton Cemetery, P.O. Box 506, Cherokee, AL 35616, or Tuscumbia First United Methodist Church. Condolences may be left at morrisonfuneralhomes.com.

Paul Rex Keeton passed away Friday, January 29, 2021, at the age of 86 at the University of Alabama Hospital, Birmingham, AL, after a brief illness. Rex was born in Cherokee, Alabama on June 21, 1934, to loving parents, Paul and Lenise Keeton.... View Obituary & Service Information

The family of Paul Rex Keeton created this Life Tributes page to make it easy to share your memories.

Send flowers to the Keeton family.