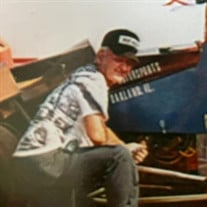 Marion Jacobs, 85, died on May 26, 2021. A memorial service will be held on Saturday, June 26, 2021 at 9:00 am at Highland Park Baptist Church. Marion was born on July 4, 1935, in Columbus, Nebraska, to Henry Major Jacobs, father, and Pearl Elizabeth Hosner Jacobs, mother. Marion was an avid race car driver. He raced many types of race cars from the time he was seventeen years old including jalopies, supermodifieds and sprint cars. He started his racing career in Nebraska and then moved up to supermodifieds in Kansas. He later moved to California where he raced his first sprint car before moving to North Alabama. Marion raced at 257 racetracks over his 69-year racing career. His final race was at Thunderhill Raceway in Summertown, Tennessee where he raced his blue 3D Sprint Car in 2012. Marion is preceded in death by his parents, Henry and Pearl Jacobs; his wife Maxine Jacobs; daughter, Dianna and granddaughter, Carrie. He is survived by his two sons, Marion Jacobs Jr. and Daniel Jacobs; grandchildren Jennifer Jones (Nick), Justin Jacobs (Tera), Jessica Jacobs, Cody Jacobs, Cassidy Jacobs, Wyatt Jacobs (Courtney), Travis Jacobs, Trevor Jacobs, Nicole Jacobs and Brittany Jacobs. He is also survived by a host of great-grandchildren. The Jacobs family would like to say a special thanks to Admedisys Hospice for their wonderful care provided to Marion. In lieu of flowers, the Jacobs family asks that donations be made in memory of Marion Jacobs to The Amedisys Foundation in support of the special needs of their patients.

The family of Marion Alfred Jacobs created this Life Tributes page to make it easy to share your memories.

Send flowers to the Jacobs family.