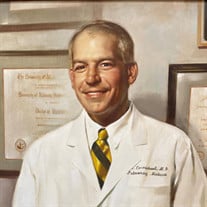 Laurence Cothran Carmichael, M.D., (Larry) was born in Winston-Salem, North Carolina to Ann Cothran Carmichael and Archie Hill Carmichael, III, M.D., while his father was a resident at The Bowman-Gray School of Medicine of Wake Forest University. The family returned to Tuscumbia in 1961 after his father’s two-year commitment to the U.S. Navy. Upon moving back to Tuscumbia, Larry attended public schools and graduated from Deshler High School in 1978. After graduation, Larry attended college at Tulane University of Louisiana, graduating in 1982 with a degree in Biology. He then began working at The University of Alabama in Birmingham (UAB) as a graduate research assistant which solidified his interest in the field of Medicine. He attended medical school at UAB where he graduated from in 1988. He continued his post-graduate training at Vanderbilt University from 1988 through 1995. While at Vanderbilt he completed an Internal Medicine Residency, and then completed a sub-specialty training in Pulmonary and Critical Care Medicine. He served as Chief Medical Resident, Nashville Veterans Affairs Medical Center, where he was mentored by Dr. Roger M. DesPrez, Dr. William Salmon and Dr. William Stone. He also served as an Instructor in Medicine and an Attending Physician on the VA Internal Medicine Service. Larry was board certified in Internal Medicine, Pulmonary and Critical Care Medicine and Sleep Medicine. Larry returned to the Shoals in 1995 and began his practice in Pulmonary and Critical Care Medicine. Along the way, he became fascinated with Sleep Medicine and after 20 years of Pulmonary and Critical Care Medicine he began to concentrate solely on the practice of Sleep Medicine which consumed the latter part of his career. He is preceded in death by his parents, Ann and Archie Carmichael, sister, Francis Elizabeth Riley, mother-in-law, Joyce McCarty White, and stepmother, Jean P. Carmichael. He is survived by his wife of 37 years, Belinda Ann Carmichael, daughter, Cothran Ann Carmichael and a son, Laurence Cothran Carmichael, Jr. (Emily), and brother, Rev. Hill Carmichael (Amanda, nephews - Archer and Mills), aunt, Margaret Cothran, uncle, Robert Cothran, Jr., father-in-law, Johnny Keyes White, sisters-in-law, Pamela Joyce White and Sharon White Weltlich (Steve, nephews – Stephen and William, and niece – Emily Keyes), brother-in-law, Kerry P. Riley, many close cousins and friends who became family over the years. Larry had the great privilege of working with many outstanding physicians, nurses and support personnel during his 27-year career at Helen Keller Hospital. This work brought him great professional satisfaction and comfort knowing his patients received excellent care. A celebration of life for Larry is planned for Saturday, February 19, at First United Methodist Church in Tuscumbia, Alabama. Visitation will be held in the church sanctuary from 12:30 to 2:30pm with the memorial service beginning immediately following the visitation. In lieu of flowers, donations may be made to Helen Keller Hospital Foundation (https://www.helenkeller.com/foundation/ways-to-give) or Vanderbilt University Medical Center (https://www.vanderbilthealth.org/ways-give). Honorary pallbearers include: William M. Carmichael, Mark Lile Fennel, Howell Thomas Heflin, Jr., S. Park Mims, DMD, Mark R. McIlwain, DMD, MD, Jack McLendon, M.D., and Phillip Montgomery.

The family of Dr. Laurence C. Carmichael Sr. created this Life Tributes page to make it easy to share your memories.

Send flowers to the Carmichael family.