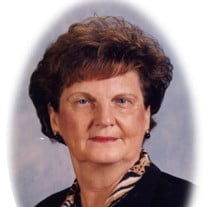 Joyce McCarty White, 83, of Tuscumbia, Alabama passed away peacefully January 4, 2022, at home surrounded by her loving family. A memorial service will be held on Saturday, January 15, at First Baptist Church, Tuscumbia, Alabama at 1:00 p.m. The Reverend Barrett Long will be officiating. There will be a private visitation and committal service for the family at Oakwood Cemetery. Joyce was born in Stringer, Mississippi on June 19, 1938, to Flois Elizabeth King McCarty and Raymond McCarty and was the youngest of five children. She graduated from Stringer High School as Valedictorian, then graduated from Mississippi College with a Bachelor of Science. Her teaching career started in 1961 in Birmingham, Alabama while her husband attended pharmacy school. Later she continued her education at The University of Alabama earning a Master of Arts and a AA degree. Joyce taught school for over 40 years. She truly had a lifelong passion for teaching, retiring as an educator from Colbert Heights High School. As a teen, Joyce won championships in swimming and diving in the state of Mississippi. She and her husband moved to Tuscumbia in 1963 where she continued enjoying water activities. She loved boating with friends and family and proving to any naysayers that she could still do a perfect dive well into her sixties. Joyce was an enthusiastic member of several organizations including Delta Kappa Gamma Society for Outstanding Women Educators, Muscle Shoals District Service League, The University of Alabama National Alumni Association, Mississippi College Alumni Association and Alabama Education Retirees Association. Joyce received the “Teacher Golden Apple Award” for being instrumental in the lives of her students from the Alabama Governor in 1994. Her students still remember many of her antics that made them love her. She is survived by her husband of 62 years, Johnny Keyes White; her children, Belinda Carmichael (Larry), Pamela Joyce White, and Sharon Weltlich (Steve); her grandchildren, Cothran Carmichael, Laurence Carmichael, Jr. (Emily Rose), Stephen Weltlich, Jr., Emily-Keyes Weltlich, and William Weltlich; her sister Glaniece Roberts (Charles); her in-laws, Helen McCarty, Elizabeth Allen, Jimmy Don White (JoAnn), Betty Jo Hollingsworth (David), Pat McCallum, William Cleo White, Jr. (Mary John), Lynn White (Andy) and numerous beloved nieces and nephews. Joyce was preceded in death by her brothers, Edsel McCarty (Ada), Emmett Earl McCarty (Jeanette), and Melton McCarty, and her in-laws Faye McCallum and JC Allen. Memorials may be made to First Baptist Church, 203 North Dickson Street, Tuscumbia, Alabama 35674.

The family of Joyce McCarty White created this Life Tributes page to make it easy to share your memories.

Send flowers to the White family.