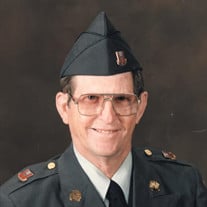 Joseph Lee McCoy, 90, Sheffield, died February 12, 2021. There will be a graveside service at 12:00 p.m. Saturday, February 20, at Oakwood Cemetery, Sheffield, with Dr. Zach Richards officiating. Joe was preceded in death by his wife, Frances. He also was preceded in death by his parents Vonley and Chloe McCoy; his brother Jim, his wife Mona, and their son Jimmy; and his brother-in-law Ron Newborn. He is survived by daughters, Regina McCoy (Larry Brumbeloe), Sheffield, and Rhonda McCoy, Muscle Shoals, along with his beloved Yorkie, Jock, and his “grand-dogs”, Wally and Rosie. Joe was also survived by his sister-in-law, Doris Newborn; nieces and nephews; and extended family. “Little Joe” never met a stranger and was always willing to help people if he could. He was an avid Alabama fan. He enjoyed driving his Corvairs and “tinkering” with them. He also enjoyed golf, bowling, and NASCAR. One of his favorite past-times, until it burned down, was visiting Stanfield’s with his buddies, Phares Birdwell and Ellard Greene. Joe was a proud Korean War veteran and retired from Reynolds Alloys and the Army National Guard. Pallbearers are Johnny Borden, Nelson Casiday, Lloyd Jackson, Terry Lester, Alex Newborn, and Bobby Rutledge. Honorary pallbearers are Larry Brumbeloe and Buster Isbell. The family would like to thank Visiting Angels and Comfort Care Hospice for their caring assistance with our Dad. In lieu of flowers, the family requests that donations be made in Joe’s memory to Small Paws Rescue, Tulsa, Oklahoma, or to St. Jude, Memphis, Tennessee.

The family of Joseph Lee McCoy created this Life Tributes page to make it easy to share your memories.

Send flowers to the McCoy family.