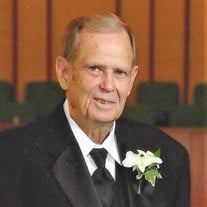 John Davis Armor, Jr., 98 of Muscle Shoals, died Thursday, April 28, 2022. His family will receive friends on Sunday, May 1, 2022, from 1:00-2:00 p.m. at Morrison Funeral Home in Tuscumbia. The funeral service will immediately follow in the... View Obituary & Service Information

The family of John Davis Armor Jr. created this Life Tributes page to make it easy to share your memories.

Send flowers to the Armor family.