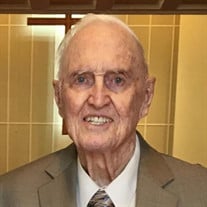 Joe I. Sandlin of Tuscumbia, AL passed away May 24, 2021, after 94 years of loving service and leadership to his family and the many young people who were blessed to know him as a coach, science teacher, Boy Scout leader, and school principal in Spring Valley and Leighton, AL. He was a man of “The Greatest Generation” and proudly served his country in the Army Air Corp in WWII. He began life as the son of a Methodist minister in Gordo, AL, October 8, 1926. In school he was a star athlete. Joe graduated with degrees from the University of Alabama and followed Alabama sports with interest. He met Natalie Johnson Sandlin at Liberty High School in 1950 and they married in 1952. They were blessed with three daughters, Sandi, Brenda (deceased), and Amy Jo; three grandchildren; and six great-grandchildren during their almost 69 years of marriage. Joe was an avid outdoorsman who knew the flora and fauna of Alabama. He enjoyed fishing, hunting, and had a green thumb for growing vegetables. He was famous for his smothered quail, venison tenderloin, yeast rolls, and peanut brittle. Joe Sandlin was a Christian who lived his testimony and was a devoted member of First United Methodist Church in Tuscumbia. He traveled to participate in mission work to Jamaica, Costa Rica, and Louisiana. His funeral will be held at his church on Saturday May 29, 2021, with visitation at 9:00 a.m. and the funeral to follow at 10:00a.m. A second service will be held at 3:30p.m. at Forest UMC, Ethelsville, AL, where Joe and Natalie are associate members and where they married in 1952. The family requests that masks be worn while inside at both services. He will be laid to rest with other family members in Forest Community Cemetery. Joe is survived by his wife Natalie Johnson Sandlin; Sandi Sandlin Chando (Carl), Amy Jo Sandlin, Mark and Melissa Chando (Eleanor, Emmett, Miles, and Maddox), Cami and Brian Fields (Preston and Margo), and Joe Sandlin and Danielle Chando. Memorials may be sent to the charity of your choice, First United Methodist Church of Tuscumbia, or Forest UMC in Ethelsville, AL. Brian Fields (grandson-in-law) said, “He was always such a fine example to us all, especially as a father, grandfather, and husband. I am only better for having met and spent time with such a wonderful man.”

Joe I. Sandlin of Tuscumbia, AL passed away May 24, 2021, after 94 years of loving service and leadership to his family and the many young people who were blessed to know him as a coach, science teacher, Boy Scout leader, and school principal... View Obituary & Service Information

The family of Joe I. Sandlin created this Life Tributes page to make it easy to share your memories.

Send flowers to the Sandlin family.