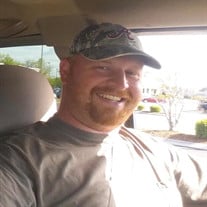 Jeremy Paul Wesley Strange, 40, was taken from his loved ones Tuesday, August 31, 2021, after a battle with Covid. The visitation will be Sunday, September 5, 2021, from noon – 2 pm at Morrison Funeral Home, Central Heights. The funeral service will follow at 2 pm in the chapel with Carl Copeland officiating. Burial will follow at Bumpus Creek Cemetery, Waterloo. Survivors include his mother Leslie Jones; sisters Lacy Scott (Kevin) and Lindsey Evans (Randall); nieces Kassy Scott; Raven and Phoenix Evans; nephew Connor Scott (Jeremy’s lil mini me); maternal grandmother Loudean Schilling and paternal grandmother Anne Strange. Jeremy’s extended family includes Keith and Shirley Cole; Brad, April and Harper Leadford; Ricky and Becky Barrier. Jeremy is preceded in death by his stepfather Mark Wenger, nephews Dante, Asher and Lil Bit Evans. Paternal grandfather, Paul Strange, Sr. (Moose) and maternal grandfather Clarence Wesley Jones (Coon). Jeremy Strange was born on March 4, 1981. He was a native of Waterloo, Alabama but lived most of his life in Walnut Grove, TN. He graduated from Waterloo High School in 2000. He attended Allen Thornton vocational school. In school he was a quiet boy, but on the “weekends” he would open up. He had worked hard his whole life. He was great with his money always knowing where it went. He was a budgeter with goals. Everything he had he had gotten on his own which included his fortress on Benson Town Drive. Jeremy had a heart of gold with an old soul who was a dependable friend that you could always count on. He was a protector of his family and friends. He has done so many good deeds throughout the years that he kept confidential. He was not the type of person that would brag about his good deeds. He was a nice guy who always had a beautiful smile. He always loved being outdoors he loved 4-wheeler riding, going to dry creek and the waterfall and fishing even fishing at night with his best friend Brad. This man could not stay still. He would run the roads down to Waterloo and go out of his way to visit people he cared for near and far. He loved to take nature pics. He was a jokester that could aggravate you. He was goofy at times and also serious about important things in life. He was one of the good ones. Jeremy was a beloved son, brother, friend and uncle. He cherished his nieces and nephew. He had many friends from his present and past jobs that thought highly of him. If not for Covid there is no doubt that Jeremy would have been the perfect husband, father, grandfather and great-grandfather. Pallbearers will be Keith Cole, Kevin Scott, Jeremy Simpson, Jonathan Boatright, Brad Leadford, Randall Evans. Honorary pallbearers will be Larry Smith, Keith Dean and Ricky Barrier. The family would like to extend special thanks to the staff of NAMC ER and 2300 ICU for the care and support during this difficult time. The family ask that visitors respect the COVID-19 safety guidelines

Jeremy Paul Wesley Strange, 40, was taken from his loved ones Tuesday, August 31, 2021, after a battle with Covid. The visitation will be Sunday, September 5, 2021, from noon &#8211; 2 pm at Morrison Funeral Home, Central Heights. The funeral... View Obituary & Service Information

The family of Jeremy Paul Wesley Strange created this Life Tributes page to make it easy to share your memories.

Jeremy Paul Wesley Strange, 40, was taken from his loved ones...

Send flowers to the Strange family.