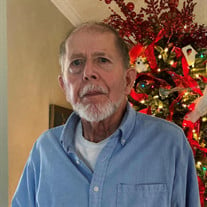 James (Jim) Maurice Logan (79), Tuscumbia, passed from earth to heaven on Monday, April 25, 2022, after a brief illness. Visitation will be held on Wednesday, April 27, from noon until 2 pm at Morrison Funeral Home, Cherokee, followed by a graveside service at 2:30 pm at Barton Cemetery with Wendell Riner officiating. Born on March 10, 1943, Jim was a 1961 graduate of Central High School, a veteran of the United States Navy and was retired from the Tennessee Valley Authority where he spent most of his career traveling the Tennessee Valley working as a diver/tender. He was a long-time member at Chapel Hill Church of Christ where he made a joyful noise to the Lord as the song leader for more than 20 years. He humbly lent a hand to anyone in need, and he was a steady source of peace and calm to those around him, always reminding them of Philippians 4:6: “Rejoice and be anxious for nothing, but instead, with thanksgiving, give your concerns to God.” Jim loved to spend time in God’s creation, whether hunting, fishing, hiking or just working in the yard. He loved to travel, and he and Janet never tired of exploring “out west,” especially his favorite place, Colorado. He was preceded in death by his parents Maurice Robert and Minnie Mae Logan. Survivors include his best friend and wife of 52 years Janet Logan; son Brent Logan (Missy); daughter Melanie Cosby (Terry); sisters Patricia Rhodes, Naomi Carlton, and Ruth Logan; grandchildren Logan Cosby, Chloe Cosby, Clay Cosby, and Hallie Logan, Mother-in-law Polly Pounders, Brother-in-law Larry Pounders (Karen), and his cherished Boston terrier Sweet Pea. He is also survived by his long-time friends Robert Sheppard (Sharon) and Charles Barnes. Pallbearers will be Larry Pounders, Junior Riner, Charles Barnes, Oscar Lopez, Logan Cosby and Clay Cosby. His family extends a most sincere thank you to Hospice of North Alabama, especially Lorie Knight, Michelle Williams, and Jenny Skipworth.

James (Jim) Maurice Logan (79), Tuscumbia, passed from earth to heaven on Monday, April 25, 2022, after a brief illness. Visitation will be held on Wednesday, April 27, from noon until 2 pm at Morrison Funeral Home, Cherokee, followed by a... View Obituary & Service Information

The family of James (Jim) Maurice Logan created this Life Tributes page to make it easy to share your memories.

Send flowers to the Logan family.