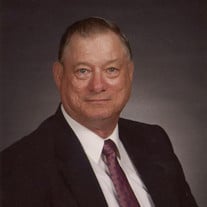 Jacky LaRoy Richardson, of Tuscumbia, Alabama, passed away Friday, March 12, 2021. He was born to Jack and Virgie Richardson, of Colbert County, on March 12,1943. He played both offense and defense for Cherokee Vocational High School (class of 1961) and was very proud that in his senior year the defense finished the season without being scored on. He was a die-hard Alabama football fan. Jacky was a faithful husband of 55+ years, loving father of three children and PopPop to five grandchildren. He was very proud of each child and grandchild and taught them by example to make the most of what the Lord blessed them with. He served in the United States Navy as a Fire Control Technician, reaching the rank of E-4, on active duty from 1964-1966 and for the Naval Reserve until 1970. His service included a one-year tour in the Mediterranean on a destroyer and he was a member of the U.S. Navy Blue Jacket Choir. He could (and usually did) fix anything and worked 40 years as an electrician for Reynolds Aluminum (Wise Alloys) in Muscle Shoals, Alabama, and Revere Aluminum in Scottsboro, Alabama, and as instrument mechanic at TVA Bellefonte in Scottsboro, Alabama, TVA Browns Ferry in Athens, Alabama, finishing his career at Weyerhaeuser Paper Mill in Columbus, Mississippi, retiring in 2005. He loved cooking, gardening, fishing, hunting, and woodworking. He offered his expertise to anyone who needed it, including family, friends, neighbors and even strangers. Most of all, Jacky loved his Lord, His Word, His Church. He was an active member of Valdosta Baptist Church and served as Sunday School teacher and deacon. He generously donated his time/expertise to the church as handyman. He loved mission trips, both local and overseas, traveling to Alaska twice and several times to Brazil, again offering his talents in the Lord's service and for His people. He especially loved working with World Changers, having participated as a crew chief for over 10 years. His favorite Scripture passage was Isaiah 55:11 “...so is My Word that goes out from My Mouth: It will not return to Me empty, but will accomplish what I desire and achieve the purpose for which I sent it." Jacky freely shared the Lord's Word and witnessed freely in obedience to His Lord, both on mission trips and in his daily living. He is survived by his devoted wife of 55 years, Linda Dougless Richardson, of Tuscumbia; daughter, Jacquelyn Richardson Kobet (Gary) of Soddy Daisy, Tennessee; son, Lowell Douglas Richardson (Alison) of Columbiana, Alabama; and daughter, Christi Richardson Johnson (Steve) of Mobile, Alabama; along with grandchildren, Deanna Kobet Smith (Cody), Jack Kobet, Andi Johnson, Wesley Johnson, and Luke Richardson. Also surviving are brothers, Sammy Richardson (Donna) and Larry Richardson (Joyce), and several nieces and nephews. Pallbearers include Gary Kobet, Jack Kobet, Cody Smith, Steve Johnson, Wesley Johnson, Wes Richardson, Brett Richardson, and Loren Richardson. In lieu of flowers, donations may be made by check designated for the American Gospel Project, made to Valdosta Baptist Church, 103 East Marion Ave, Tuscumbia. Or, contributions may be made to the organization formerly known as World Changers at Colbert Lauderdale Baptist Association, c/o Singing River Project, 3901 Hatch Blvd, Sheffield, Alabama, 35660. Arrangements have been entrusted to Morrison Funeral Home, 825 N. Main St, Tuscumbia. Services will be held Tuesday March 16,2021 at Valdosta Baptist Church of Tuscumbia. Visitation is scheduled for 10am and funeral at 11am, with the Reverend Scott Livingston and Brother Jeff Newton officiating. Interment will follow at Tuscumbia Oakwood Cemetery. The family requests attendees wear a mask and practice social distancing.

Jacky LaRoy Richardson, of Tuscumbia, Alabama, passed away Friday, March 12, 2021. He was born to Jack and Virgie Richardson, of Colbert County, on March 12,1943. He played both offense and defense for Cherokee Vocational High School (class... View Obituary & Service Information

The family of Jacky LaRoy Richardson created this Life Tributes page to make it easy to share your memories.

Send flowers to the Richardson family.