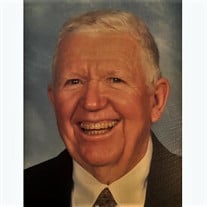 Hugh Dean Harwell, Sr., 91, previously of Cherokee, Alabama, left this life on August 19, 2021. Born in Cherokee on December 10, 1929, to Solen and Vina Harwell. Hugh married Mildred Whitfield on March 14, 1949. With two children and one on the way, he moved his young family from Cherokee to Detroit in 1953, where Hugh had gone several months before to find work. They lived in Farmington, a suburb of Detroit, until 1989, when, in anticipation of Hugh’s retirement from Chevrolet. where he had worked as a pipefitter for 25 years, they sold their Michigan home and bought property in Cherokee. In addition to their new residence, the farm included the actual house they had rented just before moving north. Despite living in Michigan for 37 years, Hugh never considered Michigan “home.” His home was always Alabama. So, after returning to Cherokee, and for the next 31 years, Hugh became the farmer he had always wanted to be. He raised cattle and various other farm animals along the way. The daily work of maintaining the farm helped keep him young; it always put a smile on his face when people commented on his youthful appearance! Hugh and Mildred enjoyed 60 years of married life before a series of strokes finally resulted in Mildred’s passing in 2009. Hugh had remained her primary caregiver during the last five years of her life, even as she became increasingly debilitated. During that time, Hugh also took over as caregiver for their special son, Arthur, and continued in that role until he became ill himself earlier this year. Hugh was a Mason and held dual memberships in Farmington Lodge in Michigan and Vertagreen Lodge in Cherokee. He and Arthur regularly attended Harris Chapel Baptist Church in Cherokee. Hugh will be remembered as a hardworking, dedicated family man. He was preceded in death by his wife, Mildred, and his parents, Solen and Vina. Hugh is survived by his two brothers, Sammie P. Harwell (Janice) of Cherokee and Bruce L. Harwell (Ann) of Iuka, Mississippi. Hugh’s brothers were tremendously helpful to him on the farm throughout the years. Hugh will be greatly missed by his three sons, Hugh Jr., (Colleen); Arthur; and Charles (Linda); his beloved grandchildren, Amy Sankaran (Vivek), Megan Harwell, Ryan Harwell, Shawn Harwell (Kristin), and Jason Harwell; and nine great-grandchildren. Hugh D. Harwell, Sr., will be interred beside Clara Mildred Harwell in Cypress Grove Memorial Gardens in Iuka. A graveside service will be held at 2:00 p.m. on Sunday, August 22, with Bro. George Henley officiating. In lieu of flowers, those wishing to make a donation in Hugh's memory are kindly asked to consider Arkansas Children’s Foundation, P.O. Box 2222, Little Rock, AR 72203 or www.archildrens.org/giving.

Hugh Dean Harwell, Sr., 91, previously of Cherokee, Alabama, left this life on August 19, 2021. Born in Cherokee on December 10, 1929, to Solen and Vina Harwell. Hugh married Mildred Whitfield on March 14, 1949. With two children and one on... View Obituary & Service Information

The family of Hugh Dean Harwell Sr. created this Life Tributes page to make it easy to share your memories.

Send flowers to the Harwell family.