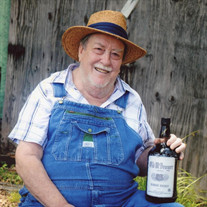 Hermond Gernest McBrayer, 82, Tuscumbia, passed away on Sunday, February 7, 2021. Visitation will be Tuesday, February 9, from 6:00 &#8211; 8:00 p.m. at Morrison Funeral Home, Tuscumbia. The funeral service will be Wednesday, February 10 at... View Obituary & Service Information

The family of Hermond Gernest McBrayer created this Life Tributes page to make it easy to share your memories.

Send flowers to the McBrayer family.