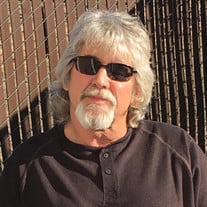 Eddie A. “Squirrel” Murphy, age 65, of Cherokee, passed away on Wednesday, April 21, 2021. The visitation will be at Morrison Funeral Home, Cherokee on Saturday, April 24, from 6:00 p.m. until 8:00 p.m. The funeral service will be Sunday, April 25, at 2:00 p.m. in the funeral home chapel. Burial will be in Asphalt Rock Cemetery. Eddie was a lifelong resident of Cherokee, Alabama. He is preceded in death by his son, Scott Murphy. Eddie is survived by his wife of 41 years, Kathy Murphy; son, Kevin Murphy (Jamie); brother, Steve Murphy; grandchildren, Cloe, Taylor, and Kashton Murphy; and his step-grandchildren, Gage Pugh and Kolton Holland. Pallbearers will be Casey Cornelius, Chuck Murphy, Dewayne Keller, Mark Cosby, Clay Waddell, and Terry Gene Murphy. Honorary pallbearer will be Jim Scoggins.

The family of Eddie A. "Squirrel" Murphy created this Life Tributes page to make it easy to share your memories.

Send flowers to the Murphy family.