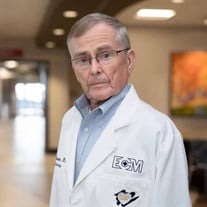 Dr. Donald L. Johnson MD of Killen passed away on Tuesday April 28, 2021. Dr. Johnson practiced Radiology at North Alabama Medical Center, ECM East, Shoals Hospital, and Russellville Hospital. Dr. Johnson was born on January 30, 1941. He was raised on a farm on the high plains of Nebraska. Working on the family farm, he learned from an early age the value of a strong work ethic and high moral being. He carried these values into his adult life through his family life, military service, career as a practicing physician, and relationships with business associates and friends. Dr. Johnson dedicated more than half his life to the love and care of his wife, Kathy, and two sons, Donald Jr. and Derek. His stoic demeanor only thinly veiled how much he cared for his family. At home, he was always by his wife’s side and enjoyed spending time with his sons discussing their hobbies and interests. He led a very interesting life and he enjoyed telling his family stories about the lives of his relatives and their lives on the farm, his adventures, and his experiences. He enjoyed the tranquil nature of living on the lake and the refreshing time he and his wife took when they traveled to the beach. Dr. Johnson was a patriot and served his country through his distinguished service as a Flight Surgeon in the United States Navy and Marine Corps from 1967 to 1970. He rose to the rank of Lt Commander and received the Navy Commendation Medal with Combat Distinguishing Device, Fleet Marine Force Combat Operation Insignia with Bronze Star, Vietnam Service Medal with Flight, Republic of Vietnam Campaign Medal with Device, and National Defense Service Medal. Dr. Johnson attended Nebraska State Teachers College in Chadron, Nebraska and graduated Summa Cum Laude in Chemistry and Biology in 1962. He graduated medical school from the University of Utah School of Medicine in 1966. He completed a rotating internship at Denver General Hospital in Denver Colorado in 1967. He completed his residency in Radiology at the University Hospital in Birmingham, Alabama in 1974. He was board certified in Radiology by the American College of Radiology in 1973. He was first licensed as a physician in 1972. He was a member of the Alabama Medical Association and Lauderdale County Medical Association. He practiced Radiology in Lauderdale County and surrounding communities for 47 years. His expertise, diligence, and gentle nature will be greatly missed by his partners, the staff, and the patients at the medical facilities in which he practiced. He is preceded in death by his father, Walter D. Johnson, and his mother, Mildred M. Johnson. He is survived by his wife of 46 years, Kathy; two children, Donald L. Johnson, Jr. and Derek K. Johnson (Marci) ; two brothers and a sister, Lyle D. Johnson (Linda), Glenn A. Johnson (Brenda), and Rita Bauman (Randy); an aunt, Ella Mae Mills; brother-in-law Rick W. Thornton (Pam); 10 nieces and nephews; one special dog, Sophie; and one special cat, Maggie. The family wishes to thank the NAMC Emergency Room staff, Dr. Roth, 5 th Floor Nurses, and the ICU staff for their compassion, care, and efforts. The family also wishes to thank his friend, Dr. Felix Morris, for his diligent and compassionate care during Dr. Johnson’s last years. Dr. Lyman Mitchell was Dr. Johnson’s longtime friend and personal physician; the family wishes to thank him for his dedication and determination to make our husband and father well. Pallbearers are Rick Thornton, Frank Doerflinger, Parke Crisler, William Senn, Mark Holley, and Brock Pence. Honorary Pallbearers are Dr. Felix Morris, Dr. Lyman Mitchell, Dr. James Northington, Conrad Pitts, and the Partners and Staff of Lauderdale Radiology Group. Visitation is 2:00 - 4:00 PM, Sunday May 2, 2021 at Morrison Funeral Home, Central Heights, Alabama. The family will have a private graveside service at a later date. In lieu of flowers please donate to the Florence-Lauderdale Animal Shelter or the church/charity of your choice. Please Visit www.morrisonfuneralhomes.com to leave condolences.

The family of Dr. Donald L. Johnson MD created this Life Tributes page to make it easy to share your memories.