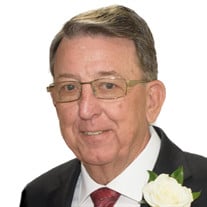 Dewey Eugene Willingham, age 77, of Sheffield Alabama passed away April 5, 2022, surrounded by his family at home. He was a faithful Christian, loving husband, wonderful dad, devoted “Poppa”, nurturer to his family, caring neighbor, and good citizen. He was an active member of the Cherokee Church of Christ and Tuscumbia Church of Christ where he taught youth and adult bible classes and served as deacon of the Bible Class Committee. He was a student of God’s word his entire life. He grew up in the Valdosta community in the 1950s surrounded by cousins and friends. He married his high school sweetheart, Mary Jane, and moved his family to Cherokee as he began his career at the TVA Colbert Steam Plant. He was involved with the rescue squad and volunteered at school and community events. He served on the Helen Keller Festival board of directors in the eighties. Later he and his wife moved to Sheffield where they began their retirement. He loved sports and was an avid Alabama, St. Louis Cardinal, and Deshler fan. He especially enjoyed following Deshler girls’ basketball and volleyball and was known as the “candy man”, always a fixture at the Deshler Dome. He spent endless hours at gyms, soccer fields, baseball fields, and tennis courts cheering on and supporting his grandkids, nieces, and nephews. He was preceded in death by his parents, Meredith and Blanche Willingham. He is survived by his wife of 58 years, Mary Jane; son, Mark Willingham (Janet); daughter, Lisa Wilson (Russ); grandchildren, Thomas Willingham (Chelsea), Olivia Hayes (Nick), Emily Wilson, and Jack Wilson; brothers, Bryant Willingham (Vicki) and Lee Willingham (Bee); and sister, Kay Burton (Philip). Visitation will be Thursday, April 7, from 6:00 – 9:00 p.m., at Morrison Funeral Home, Tuscumbia. The funeral will be Friday, April 8, at 1:00 p.m., at Tuscumbia Church of Christ, with viewing at 12:00. Jeff Abrams will be officiating. Burial will follow at Guy Cemetery. Pallbearers will be Marshall Lewey, Doug Lewey, Jerry Dean Lewey, Philip Burton, John Burton, Thomas Willingham, and Jack Wilson. Special thanks to Hospice of North Alabama, especially Lorie Knight and Stephanie Clemmons.

The family of Dewey Eugene Willingham created this Life Tributes page to make it easy to share your memories.

Send flowers to the Willingham family.