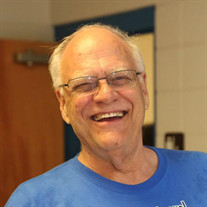 David A. Johnson, of Sheffield, passed away peacefully at home on Friday morning, September 17, 2021, after a courageous battle with cancer. He was 71. Visitation will be Sunday, September 26, 2021, from 1:00 – 3:00 p.m. at York Bluff Baptist Church in Sheffield with the funeral service following at 3:00 p.m. in the church sanctuary. Dr. Zach Richards and Bro. Chad Holder will officiate. David was a 1968 graduate of Sheffield High School. He attended Northwest Shoals Community College and the University of North Alabama. A founding member and past president of the Muscle Shoals Music Association, David played an active role in developing what became known as the Muscle Shoals sound. As a child he ran a radio station out of his bedroom, reading the newspaper and playing records for everyone in the neighborhood. As an adult, he began his career working as a disc jockey for Mitch Self at WLAY radio, then became a studio manager and recording engineer for Quin Ivy at his Quinvy Recording Studio before opening Broadway Sound Studio in Sheffield, which he owned for 21 years. There he produced records for artists including Percy Sledge, Clarence Carter and Lynyrd Skynyrd, for whom he produced the first cut of Free Bird. David served on the board of the Alabama Music Hall of Fame from 1980 until 1989 then served as Executive Director from 1989 until 2010. Since then, he has continued making an impact on the music industry with his company, David Johnson Productions, which hosted the Sheffield Street Party for the past 10 years. David loved Sheffield and was passionate about serving his community. He served as commissioner of the City of Sheffield from 1979-1988, on the board of Northwest-Shoals Community College and on the board of directors of Sheffield Utilities. He was an active member of Shoals Area Rotary Club and Sheffield Central for many years. Devoted to supporting tourism efforts in the Shoals and across Alabama, David served as a board member for Alabama Mountain Lakes Tourism Association for 3 years and was president of the board two of those years. He also served on the Marketing Committee and Advisory Board for the Alabama Tourism Department and on the Colbert County Tourism and Convention Bureau, serving as president of the board for six years. David was a graduate of the Southeast Tourism Society Marketing College, was appointed to the Alabama Tourism Hall of Fame in 2016 and was awarded the Alabama Mountain Lakes Tourism Association’s Peak Award for “Lasting Impression” in 2019. David was passionate about Sheffield, Auburn, music and Shoals tourism, but above all he loved Jesus, his Lord and Savior, and his family and friends. He was a long-time member of York Bluff Baptist Church in Sheffield and was active in the church until his death. David was larger than life, greeting every person he met with a smile, filling every room with joy and laughter. His life was filled with adventure and fun; he lived life to the fullest and had no regrets. He was confident in his hope in the Lord and ready to spend eternity in heaven. David is survived by his beloved wife of 50 years Faye Kirk Johnson, brother Mike Johnson, sister Lynne Johnson Weaver (Jack), nephews Ryan Weaver, Jordan Johnson (Alexandra) and Scott Weaver, and nieces Dr. Lorie Johnson, Molly Weaver, Tina Harrison and Pam Johnson. He is preceded in death by his parents, William Hollis and Irene Johnson, twin brother Phillip Johnson, older brother William Hollis Johnson Jr., and sisters-in-law Margaret Johnson and Linda Johnson. Pallbearers will be Bill Parker, Jordan Johnson, Ryan Weaver, Rodney Logan, Steve Hargrove and Ian Sanford. Honorary pallbearers will be Byron Franklin, Ken Blackstock, L. O. Bishop, Johnny Crawford, Quin Ivy, Brian Young, Travis Wammack, Billy Lawson, Eddie Floyd, Grady Smith, Ralph Burke, Marty Raybon, Phillip Byars, and Alan Walden. In lieu of flowers, the family asks that donations be made to York Bluff Baptist Church in Sheffield. Please visit morrisonfuneralhomes.com to leave tributes and condolences for the family.

The family of David A. Johnson created this Life Tributes page to make it easy to share your memories.

David A. Johnson, of Sheffield, passed away peacefully at home...