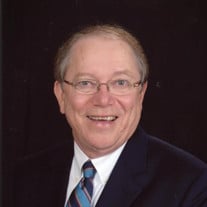 Charles Marvin (Chuck) Morgan died peacefully at his home, with his family beside him on Wednesday, September 15, 2021. His funeral service will be Monday, September 20, 2021, at First Christian Church, Florence at 10:00 am. Due to Covid, there will be no visitation and everyone is asked to please wear a mask to the service. Burial will follow at Florence City Cemetery in Florence, Alabama. Sid Fulford and Reverend Cameron Douglas will officiate the service. Chuck was predeceased by his parents, Samuel Marvin Morgan and Ellen Gilley Morgan. He is survived by his wife of forty four years, Barbara Muse Morgan, his son, Christopher Paul (Chris) Morgan (Jennifer) of Florence, and his daughter, Mary Ellen Towns (Brandon) of Asheville, North Carolina. He was Papa Chuck and Poppy to his three grandsons, Samuel Gresham Morgan, Henry Silas Morgan, and Charles Christopher (Charlie) Morgan. He is also survived by his sisters, Shirley McCain (Clyde) of Birmingham, Janice Gargis (Roger) of Muscle Shoals, and sisters in law, Betty Oliver (Larry), Paula Spears, Judy Thompson (Tim) and brother in law, Ed Davis, nieces and nephews. The Morgan family moved to Leighton, Alabama in 1953, where Chuck’s dad started a tractor business and then later converted the business to Marvin Morgan Furniture. Chuck grew up in the furniture business and while in high school, he learned all aspects of the business from office operations to sales to management. While at Colbert County High School, Chuck joined the marching band where he advanced his skills as a drummer. He later played the drums for several local dance bands, including the Vondals, the Dimensions and the Ribbon of Blue. When asked, he never passed up the opportunity to play drums, including stints at the Furniture Conventions, his daughter’s wedding, and most recently at his 70th birthday party. Drumming was one of his proudest accomplishments. After high school, Chuck went to Florence State College, currently the University of North Alabama where he graduated in 1971 as President of his Senior Class. After graduation, he joined the Air Force and as Vietnam was winding down, he transferred to the Air National Guard, and rejoined his family furniture business where he remained until 2007. Most recently, he was a member of the sales staff of Story and Lee Furniture. He was active in the Southeastern Home Furnishings Association and served as the President in 1997. He was the Charter President of the Leighton-East Colbert Jaycees in 1974 and was on the Board of Directors of the Colbert County Chamber of Commerce, which later merged to become the Shoals Chamber of Commerce. He served on several boards throughout his career to include the Leighton Library Board for many years and on the Town Council of Leighton. As a child and as a young adult, he was a member of Leighton Baptist Church and after moving to Florence in 1983, he became a member of First Christian Church of Florence where he served as a Deacon and on several committees. He thoroughly enjoyed good gospel music. Some of his fondest memories were his outings with his close friends, family gatherings, sailing and boating on Wilson Lake, and playing golf at Florence Country Club, Turtle Point and Robert Trent Jones. He enjoyed his life, his family, and his friends. Pallbearers will be nephews, Eric McCain, Jonathan McCain, Morgan Gargis, Shaw Gargis, Tyler Thompson, and Kyle Ellis. Honorary pallbearers will be John Schuessler, Max Eady, Ronnie McDonald, Ed Birdwell, Roger Weatherwax, Mike Spiller, Doug Johnson, Robert Porter, Charles Crow, Jim Noles, his long-time Leighton Buddies, and members of the Tyler Calhoun Prayer Group. Chuck’s family would like to thank his doctors at UAB, and Dr. Patrick Daugherty for his years of dedicated care of Chuck, as well as the staff at Northwest Alabama Cancer Center and most recently the Hospice of North Alabama staff. In lieu of flowers, Chuck’s request was that donations be made to St. Jude in honor of Jimmy King, the local St. Francis Project, or the charity of your choice. Please visit morrisonfuneralhomes.com to leave tributes and condolences for the family.

Charles Marvin (Chuck) Morgan died peacefully at his home, with his family beside him on Wednesday, September 15, 2021. His funeral service will be Monday, September 20, 2021, at First Christian Church, Florence at 10:00 am. Due to Covid,... View Obituary & Service Information

The family of Charles Marvin "Chuck" Morgan created this Life Tributes page to make it easy to share your memories.

Charles Marvin (Chuck) Morgan died peacefully at his home, with...

Send flowers to the Morgan family.