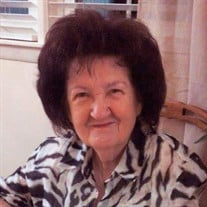 Emma Celeste Parsley Stanley passed away peaceably at home on Saturday, June 19, 2021. Celeste was born on October 22, 1925, in Nashville, TN, the fifth child of Moses Elbert Parsley and Pansey Crook Parsley. She graduated from Central High School in Nashville and graduated from Ward Belmont Music Conservatory, George Peabody College, Nashville, and Juilliard School of Music in New York, all on full scholarship. She was a member of the international music fraternity, Sigma Alpha Iota. Celeste was invited to visit Tuscumbia by the school superintendent and was offered a position to teach public school music, which she accepted. Celeste was a gifted musician and was the organist at First United Methodist Church for almost 65 years. She taught private piano and organ lessons for 40 years. She lost count of the number of weddings and funerals for which she played. Celeste met and married Walter Jarman Stanley on June 3, 1950. They were married for 54 years until he passed away in 2004. She loved her family and enjoyed outings with her children, grandchildren, and great-grandchildren. She also loved setting a beautiful table and having everyone for dinner. Celeste was preceded in death by her husband, Walter Jarman Stanley; brothers, Elbert and Nolen Parsley; sisters, Rose McElroy and Janice Kennedy; and granddaughters, Diana Caudill and Jennifer Stanley. She is survived by her daughter, Jan Stanley Caudill (Charles); son, Walter Lee Stanley (Linda C.); granddaughter, Laura Caudill Dowdy (Randy); great-grandchildren, Cody Rumble (Destiny), Gannon Lambert, Mia Celeste Dowdy, and Lilly Rose Dowdy; fourteen nieces; and nine nephews. Visitation will be from 1:00 – 2:00 p.m. Tuesday, June 22, 2021, at Morrison Funeral Home, Tuscumbia. The funeral service will immediately follow in the funeral home chapel with Rev. Mark Parris officiating. Online condolences may be left at morrisonfuneralhomes.com.

The family of Celeste Parsley Stanley created this Life Tributes page to make it easy to share your memories.

Emma Celeste Parsley Stanley passed away peaceably at home on...

Send flowers to the Stanley family.