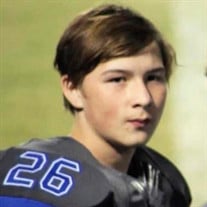 Branden Jacob Ellison was born June 29th, 2004, at 3:51pm to Jaime Lynne Johnston and Robert Ellison Jr in Bay City Mi. Branden was the true definition of a unique person. He made you laugh, made you smile, made you cry and loved you wholeheartedly. February 4th God decided he needed him more than we did and called him home. Branden was a Junior at Sheffield High School in Sheffield Alabama. Prior to that he was an athlete with the Colbert Heights football team since 8th grade. He was planning to run track for Sheffield High School. He enjoyed playing football, basketball, talking, and spending time with his family and friends, playing XBOX and worked at the local McDonald’s. He was big into music, haunted and abandoned houses and playing nerf guns with his little brothers. Upon Graduating in 2023, Branden planned to join the United States Marine Corps. Branden loved his dog Daisy Duke and his Cat Maxwell. Branden was the class clown. If you were down, he would try to get you to laugh to get you in better spirits. Branden was not just the silly, sarcastic young man we love. He was and always will be an amazing Son, Brother, Grandson, Nephew and Uncle. Branden had a special place in his heart for His Mother Jaime Lynne Johnston and his Father Robert Ellison. Older Brother Chad (Shannon), Sisters, Holly (Jesse), Amber (Michael), Shania (Justin), Jayden, and little brothers Trenton, and Wyatt. Branden had two special friends named Meagan and Jessi. Throughout his life Branden had MANY friends but Cade Fuller Elrick Harviel, Abby and Lily Best were always there for him. He was loved by Ms. Gale and Mr. Andrew, Desiree Matthews, Betty Fuller and his God Mama Fredia Love. He looked up to so many people Including, Tricia Carol Warnes, Mike Johnston (Marilyn), Katie Willingham, Aunts and Uncles, Lacey Jordan (Joshua), Ronnie Osterhout (Diana) George Osterhout (Michelle) Annie Osterhout (Kenneth Tuttle) and Chris Johnston. Nephews Landon Ellison, Jaden Ballard, Jace Jordan, and Major Johnston. Nieces, Tera Ballard, Madyson Ellison, Madison Jordan, and Serenity Ballard. Surviving Him as Well are Many Special Cousins. A memorial visitation will be Saturday, February 12, from 3:00 until 5:00 p.m. at Morrison Funeral Home, Tuscumbia. The memorial service will immediately follow at 5:00 p.m. in the funeral home chapel with Nick Ray officiating.

Branden Jacob Ellison was born June 29th, 2004, at 3:51pm to Jaime Lynne Johnston and Robert Ellison Jr in Bay City Mi. Branden was the true definition of a unique person. He made you laugh, made you smile, made you cry and loved you wholeheartedly.... View Obituary & Service Information

The family of Branden Jacob Ellison created this Life Tributes page to make it easy to share your memories.

Send flowers to the Ellison family.