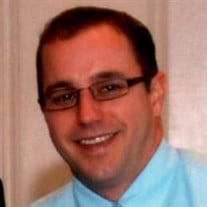 Bradley “Brad” Houston Bolding, 45, Muscle Shoals, passed away on Sunday, February 7, 2021. He was born on January 31, 1976. Visitation will be Friday, February 12, from 10:00-11:00 a.m. at Morrison Funeral Home, Tuscumbia. The Celebration of Life service will immediately follow in the funeral home chapel with the Rev. Barrett Long officiating. Brad was a graduate of Red Bay High School (1994) and Mississippi State University (1998). He worked in the Manufactured Housing and RV business in various capacities his whole life. He was employed at Patrick Industries Inc. in Decatur. Brad strived to always make people laugh and smile. He was especially proud of his children and loved spending time with them. In 2007, he was saved and was a member of First Baptist Church of Tuscumbia. Brad is survived by his children, Brady and Bree; wife, Amy; parents, Terry and Patricia Bolding of Red Bay; sister, Bridgett (Randy) Middleton of Nashville; brother, Brent Bolding of Red Bay; in-laws, Terry and Cyndi James; and a host of nieces and nephews. He was preceded in death by his grandparents, Clyde and LaVelle Shook, and Foy and Eloise Bolding. Pallbearers will be Mike Stockton, Todd Thomas, Joel Logan, Ryan Barksdale, Todd James, and Kade James. The mind is intricate and complex. Mental health disorders can be just as detrimental to a person as a disease. Brad struggled with depression issues for most of his life and would encourage anyone with these issues to seek help. No matter how hopeless a situation may seem, no situation is beyond God’s reach. Every life is precious. God’s grace, infinite mercies, and everlasting love is available to anyone that seeks Him. Always put your faith in the Lord and know He will fight your battles. “Have I not commanded you? Be strong and courageous. Do not be frightened, and do not be dismayed for the Lord your God is with you wherever you go.” Joshua 1:9 In lieu of flowers, the family requests that donations be made to either the American Foundation for Suicide Prevention, 199 Water Street, 11th Floor, New York, NY 10038 or the Brain & Behavior Research Foundation, 747 Third Avenue, 33rd Floor, New York, NY 10017. The family would like to especially thank the Tuscumbia City Police Department, Colbert County Coroner’s Office, friends, and the entire community for all of the support and love that has been shown during this difficult time.

The family of Bradley Houston "Brad" Bolding created this Life Tributes page to make it easy to share your memories.

Send flowers to the Bolding family.