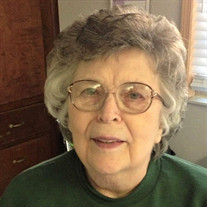 Bettye Joyce Massey Nesmith, age 86, of Florence, died Friday, August 13, 2021. Bettye Joyce was born in Sheffield, Alabama on August 7, 1935. She was a 1953 graduate of Sheffield High School, attended Larimore Business College and Shoals Community College. She married her high school sweetheart, William Thomas (Billy Tom) Nesmith, in May 1953 and they were happily married for 68 years. Bettye Joyce was preceded in death by her parents, Columbus L. Massey and Bessie Russell Massey; brother, James Martin Massey; and sister, Dorothy Massey Watkins. Bettye Joyce was a member of First United Methodist Church of Florence, Alabama. She was a life-long member of the United Methodist Church, enjoyed a spiritual renewal through her participation in the walk to Emmaus and was a devoted follower of Christ. She was previously active in the United Methodist Women and Graham Sunday School Class until she was unable to travel. She taught an adult Sunday School Class at Highland United Methodist Church in Sheffield, Alabama, and at First United Methodist Church of Florence and was active in local church, district, and conference activities. She was employed as secretary at the Florence District Office of the United Methodist Church for many years, and thoroughly loved her job. She was a member of the Order of the Eastern Star and served as Worthy Matron, member of the Pierian Study Club, former member of the Sheffield Pilot Club, and a member of the Tuscumbia Chapter of the UDC. She enjoyed needlework, sewing, knitting, and crochet. She enjoyed painting, and though she was her own worst critic, her children and grandchildren always appreciated her paintings and all her work. She was determined to visit all 50 states and was able to complete the journey with assistance from members of her family. She was able to make international trips to England, Wales, Ireland, Scotland, Canada, and Mexico. Her favorite trip was to Alaska. Bettye Joyce is survived by her husband, William Thomas Nesmith; sons, William Karl Nesmith (Sharon Metcalfe Nesmith) and Robert Ward Nesmith; daughter, Joyce Ann Nesmith (B. J. Brown); grandchildren, Summer Marie Sikkema (Jordan Sikkema) and Daniel Alexander Nesmith (Wendy Newton Nesmith); great-grandchildren, Benjamin Eli Nesmith, Jonathan Owen Nesmith, Tenley Elizabeth Nesmith, Addison Mae Sikkema, Jack Kenneth Sikkema, and Miles William Sikkema; two nephews; and two nieces. She was a devoted mother and participated in her children’s school activities and served as an officer in the Parent-Teacher Organization for many years. Pallbearers will be Daniel Nesmith, Jordan Sikkema, Mike Evans, Jim Pride, Holden Corum, and Jordan Taylor. The graveside service will be led by Reverend Dr. Terry Stubblefield. Special thanks to Glenwood Center, Southern Care New Beacon Hospice Care, and Morrison Funeral Homes. In lieu of flowers, Bettye Joyce requested that donations be made to the Building Fund of the First United Methodist Church of Florence

The family of Bettye Joyce Massey Nesmith created this Life Tributes page to make it easy to share your memories.

Send flowers to the Nesmith family.