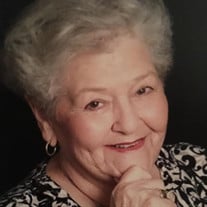 Betty Jean Jones Keenum, 82, Ford City, passed away on Wednesday, March 9, 2022. Visitation and services will be held Saturday, March 12 at East Colbert Church of Christ, where she was a member for many years. Visitation will be from 11:00 a.m. – 1:00 p.m. with the funeral starting at 1:00 p.m. Marty Evans and family members will be officiating the service. The graveside service will follow at Old Brick Cemetery. Betty Jean, known as “Becky” to everyone, was born April 29, 1939, in Hillsboro, Alabama, to the late Ellen Ruby Smith Jones and Steve Jones. She was preceded in death by her brothers, Steve Jones Jr. and Felton Ray Jones, and her sister, Frances Sue Jones. She leaves behind sister, Janie Moreland and brother, Tommy Lee Jones. Betty was married in 1954 to her beloved husband, Bobby Don Keenum. Betty and Bobby Don had four children, Bobby Joe Keenum (Donna), Frances Jean Wilcoxson (Jerry whom she thought of as her other “son”), Cherie Elaine Keenum (Doug), and Carl Keenum (Natalie, whom she thought of as her “other daughter”). Betty and Bobby Don were married for 58 years, until 2012, when she lost her best friend and husband. Betty had four grandchildren, Ryan Keenum (Ashley), Jerry Don Wilcoxson (Christy), Julia Keenum and Koby Keenum. She also had four great-grandchildren, Rylie Keenum, Rainey Keenum, Cole Keenum and Max Wilcoxson. She loved her grandkids and great-grandkids dearly. Betty was like a mother to several others as well. She loved and considered them to be like her own children. Betty made this known to all, Renee South, Tony South, Kent Woods, Thad Weber, Virginia Uriostegui, LaShanda Johnson, and Marty and Linda Evans. Herman Rae was a good friend to Betty after Bobby Don’s death. He looked after her, as his promise to Bobby Don at his passing. We want to thank and acknowledge him for being so good to her. Likewise, we would like to thank Reba Coats for her undying friendship to Betty over the years. During Betty’s time at The Cottages, Reba visited her every Wednesday and brought her breakfast. Betty was employed by the Colbert County Board of Education as a Bus Driver for over 37 years, and she also worked for HK Advertising as an office manager until she was 80 years old. Betty had kids come up to her all time to talk about riding her bus and how much they all loved her. One can only imagine all the children’s lives she touched over the years. Pallbearers will be family members and loved ones: grandsons, Ryan Blake Keenum, Jerry Don Wilcoxson, and Koby Ray Keenum; nephew, Kevin Moreland; and Kent Woods and Tony South, who were like sons. Honorary pallbearers will be Jerry Wilcoxson, Doug Johnson, Thad Weber, Joey Poss, John David Moreland, Jerrod Woods, and Dylan Bailey. The family would like to thank the employees at The Cottages in Florence for taking such good care of her, even during the hardest of times. We would especially like to thank Heather Bradford, Suzanne Burleson, Ericka Guyton, Kerri White, Malachi Frey and the late Quoshanna Thompson.

Betty Jean Jones Keenum, 82, Ford City, passed away on Wednesday, March 9, 2022. Visitation and services will be held Saturday, March 12 at East Colbert Church of Christ, where she was a member for many years. Visitation will be from 11:00... View Obituary & Service Information

The family of Betty Jean Jones Keenum created this Life Tributes page to make it easy to share your memories.

Send flowers to the Keenum family.