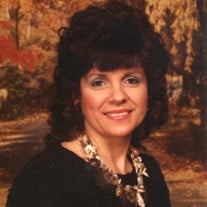 Barbara Gail Waldrep, 74, of Muscle Shoals, entered the presence of her Heavenly Father on May 31, 2021. A private service will be held with Truman Kimbrough officiating. Interment will follow in Colbert Memorial Gardens. Barbara was born on April 6, 1947, to the late Thomas and Amelia McDaniel. She was married to Charles Ray Waldrep for 57 years. Barbara’s life was a beautiful example of the redeeming grace of Jesus Christ, her Lord and Savior. She was a wonderful wife, mother, grandmother, and great-grandmother. She was very devoted to her children and always set a Godly example for them to follow. Barbara served the Lord faithfully throughout her entire life. She studied the Bible through a Bible School in Nashville. Serving her family is what Barbara loved most, teaching them to love the Lord and serve Him faithfully. She is preceded in death by her parents, Thomas and Amelia McDaniel; husband, Eldridge James; and brother, Thomas McDaniel. Barbara leaves behind her husband, Charles Waldrep; brother, Harold McDaniel; brother and sister-in-law, Billy and Donna McDaniel; sister-in-law, Jeanette Todd and Charlotte Seltzer; son and daughter-in-law, Steven and Shelley James; daughter, Melissa Waldrep; and daughter and son-in-law, Sheila and Al Van Buren. She is also survived by granddaughter and great-grandchildren, Melissa, Makynzie, and Preslee Betts; granddaughter, grandson-in-law, and great-grandchild, Emily, Javon, and Josiah Bender; granddaughters, Anna Grace and Allison Gail Van Buren; and grandsons, Sheldon Keown and Trey Rogoski. Pallbearers will be Steve James, Al Van Buren, Javon Bender, Billy McDaniel, Harold McDaniel, and Landon McDaniel.

Barbara Gail Waldrep, 74, of Muscle Shoals, entered the presence of her Heavenly Father on May 31, 2021. A private service will be held with Truman Kimbrough officiating. Interment will follow in Colbert Memorial Gardens. Barbara was born... View Obituary & Service Information

The family of Barbara Gail Waldrep created this Life Tributes page to make it easy to share your memories.

Send flowers to the Waldrep family.