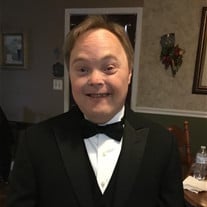 Anthony “Tony the Hulk” Daniel Ogletree, 53, of Cherokee, passed from this life into the arms of his Heavenly Savior on September 19, 2021. Tony was born on February 21, 1968 to Jimmy and Peggy Ogletree, and he has been a resident of Cherokee his entire life. Tony is survived by his loving mother, sidekick, and lifetime caregiver, Peggy Ogletree. He leaves behind a brother, Stephen Ogletree; and a sister, Shawna Ogletree. He is also survived by nieces, Dakota Putman (Thomas), Shea Brown (Chris), and Shianna Brewer (Tristen); nephews, Coty Young (Ashley), and Shannon Tuberville; nine great nephews; and one great niece. Tony is survived by his special cousin, Nickie Medford, who Tony spent a great deal of time with, riding the streets of Cherokee, and a host of friends and family. Tony was preceded in death by his father, Jimmy Ogletree; maternal grandparents, James and Ruth Crider; and paternal grandparents, William and Irene Ogletree. Tony was affectionately known as “The Hulk” and loved all things related to the Hulk, David Banner, and the color green. His favorite Hulk actor was Lou Ferrigno, the original Hulk. Tony had an infectious, loving spirit, who captured the heart of everyone who met him. He never met a stranger and made each person feel as if they mattered to him. Tony had a love for dancing and could be found dancing at church, at his home, at football games, and at the Street Dance in Cherokee. He also enjoyed swimming, eating his favorite foods, playing jokes on his family and friends, drawing, and watching the clouds during a thunderstorm. Tony embodied what it meant to love Jesus with a childlike spirit, and he drew those he knew to him through his worship and love for God. He sensed the spirit of God so closely that he would recognize those who needed prayer and pray for them. While those who love him will miss him dearly, we will remember and cherish the precious time that we had with him here on this earth. Every time we see the color green or a Hulk, we will remember Tony and share his legacy by treating other as Tony did, with kindness, compassion, and dignity. The visitation will be at Barton First Baptist Church on Wednesday, September 22, from 12:00 p.m. until 2:00 p.m. with the service to follow at 2:00 p.m. with John Gwantey officiating. Tony’s pallbearers will be Nickie Medford, Dustin Pilkinton, Shannon Tuberville, Chris Brown, Coty Young, and Mark Sellers. Honorary pallbearers will be Kenneth Pilkinton, Otis Huggins, Bubba Black, and Johnny Ogletree. Special thanks to Lori Knight, Krystal Taylor, and the 4th floor staff at Helen Keller for their love and special care to Tony.

The family of Anthony Daniel "The Hulk" Ogletree created this Life Tributes page to make it easy to share your memories.

Send flowers to the Ogletree family.