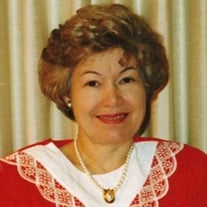 After a four-year battle with liver cancer, Ann Jaggers passed away peacefully at her home in Sheffield, AL at the age of 87. Annie Ruth Morring was born December 11, 1933, in Gurley, Alabama, and grew up there. She was the daughter of Nolen and Katie Morring. She graduated from Madison County High School in 1951. After working in Washington, DC for the FBI for two years, she attended Athens State College from 1953-1954. Then she worked in civil service at Redstone Arsenal, AL, and Fort Bliss, TX. Ann met Howard Jaggers in 1953, and they were married on Thanksgiving Day, November 25, 1954. She was married to Howard for over 67 years. After living in Nashville, TN, and Athens, AL, Ann and Howard moved to Sheffield, AL in 1970, and remained there. Ann was ahead of her time. She was a working mother before it became a standard practice. Somehow she also managed to maintain a household, and was a supportive partner for Howard. She was known for her beautiful smile. She learned to drive when she was about 35. She had never been taught, because it was not deemed necessary for girls to drive then. Howard taught her to drive in their back pasture. This was a source of entertainment and amusement for the young daughters, and a source of white knuckles and stress for the adults. But Ann did get a driver’s license. She and Howard liked to travel, and they visited the Holy Land, Europe (England, Scotland, Belgium, France, Germany, and Austria, Scandinavia (Sweden, Norway, Switzerland), Canada, and many other places. She was active in the Sheffield First United Methodist Church for over 50 years, and she led a women’s prayer group for 25 years. Survivors include her husband Howard Jaggers; her sister Kathryn Barnett; her two daughters – Patricia Jaggers and Linda Jaggers Dykes; three nieces – Judy Ashworth, Gail Adkins, and Brenda Willoughby (Terry); and one nephew – Chuck Morring (Patricia). Everyone who knew her will miss her. The Jaggers family extends its gratitude to Hospice of North Alabama and Home Instead elder care for their outstanding services in making Ann comfortable. Visitation will be Friday, August 13, from 12:00 – 2:00 p.m. at the Sheffield First United Methodist Church, followed by the funeral service with Bart Bowlin officiating. The graveside portion will immediately follow at the Richardson Cemetery in Waterloo, AL. The family is not requesting flowers, so in lieu of flowers, you may make a donation to the Sheffield First United Methodist Church if you wish.

After a four-year battle with liver cancer, Ann Jaggers passed away peacefully at her home in Sheffield, AL at the age of 87. Annie Ruth Morring was born December 11, 1933, in Gurley, Alabama, and grew up there. She was the daughter of Nolen... View Obituary & Service Information

The family of Annie Ruth Jaggers created this Life Tributes page to make it easy to share your memories.

After a four-year battle with liver cancer, Ann Jaggers passed...

Send flowers to the Jaggers family.